Skip to content
katekategordoncomau Being a writer February 16, 2019 4 Minutes

Glenda Guest grew up in the wheatbelt of Western Australia, and that landscape still influences her writing. Since leaving the west, she has lived in cities and country towns in Victoria, New South Wales, the Australian Capital Territory and south-east Queensland. She is currently living in the Blue Mountains, New South Wales. Glenda has had stories and poetry published in various anthologies and journals. Chapters from the novel Siddon Rock have been published in the journal Coastlines Cultural Magazine, which is a joint Australian-Indonesian venture; and the online magazine Spiny Babbler. She has had support from artsACT, the arts support organisation of the Australian Capital Territory, for time-out at Varuna Writers’ House in Katoomba, where the first draft of the novel was written. Glenda works as a freelance editor and writer. Her latest novel, A Week in the Life of Cassandra Aberline, was published 2018 by Text Publishing. 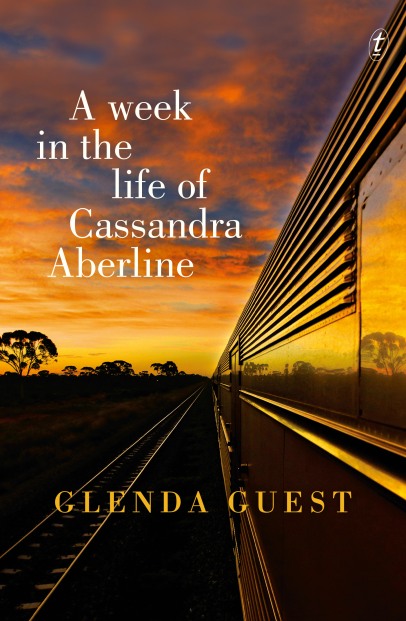 Tell us a bit about your latest book.

The structure of A Week in the Life of Cassandra Blanchard is that of a woman on the Indian-Pacific train, returning to Western Australia after some 45 years away living in Sydney. As the train roars through the vast outback she also travels back in time, looking for the rationale of the event that made her leave her home so long ago.

So there are two interconnected stories the contemporary one before, on and after leaving the train, and the one from the past that Cassie is trying to put into context.  She needs to do this as she was diagnosed as having early Alzheimers, and she want to clarify a specific event, before she loses her memory : ‘What if that was the last thing I ever remember.’

What was the inspiration for the story?

The one thing that started the thinking towards this book was my interest in twin-ness: how twins interact, how they are the same, how they are different. This is still at the heart of the story. Then I saw how friends were coping, or not coping, with parents going into dementia and I had the what-if moment: What if you’d done something you were not proud of, or was very bad, in your youth, but had put it out of mind. Would you want to fix it before you lost all memory?

Tell us about your main character. Why should we fall in love with them?

I don’t know if the reader would fall in love with Cassandra Blanchard, at least not for a while into the story. She’s very self-contained and doesn’t let people into her life easily (in the story, or the reader). This seems to be what keeps readers tied, so I’ve been told, they want to know why she is as she is, and follow her happily down the rabbit hole of her past.

Have you always written, or is writing something you’ve come to in adulthood?

Sort of both. When I was in primary school, aged about nine or ten, in a small country town in WA, my teacher told me I should go to university and study English, then write books. I told my mother this and her response was, university isn’t for the like of us. And she was correct – we were way out of the financial requirements to go to uni then.

I’d written bit and pieces, not stories but newsletters for clubs, short articles for local newspapers and such, then in my middle years slipped my way into uni as a mature-age student, ending up in the Creative Art degree at GUGC, the year it began. From then, I just kept on keeping on.

What was your favourite book as a child?

Can’t think of a favourite at all – but I read anything and everything around me. I can tell you, though, that kid’s books were more demanding in some ways than they are now. I still have what is basically a water-colour picture book with text, called Katherine.  It begins like this:  ‘This is young Katherine who lives in Australia/with her toys and her books and her paraphenalia’. What’s that word! I was four years old! I asked my mother what it meant, and she didn’t tell me. Instead, she showed me how to use a dictionary.

Can you recommend another female author we should read?

Michelle de Kretser deserves every award she gains. No-one gets under the skin of our culture (and others) quite like she does. And, I suspect the marvellous Elizabeth Jolley is not on contemporary bookshelves now but her novels should be, for reading pleasure and as a master-class in how to not be didactic.

What was the last book you read and loved?

Do you have a favourite quote by a female author?

The wastepaper basket is your friend. Margaret Atwood

You don’t have to think about writing a message into a book. If it’s written well it will be there. Elizabeth Jolley.

Tell us three fun facts about yourself, that other people might not know?

Only one other person in the world knows I wear his work socks to bed.

Do you have a favourite illustrator of children’s books? Why?

I’m not a kids’ lit person, but I love Maurice Sendak’s monsters.

What are the best and worst pieces of writing advice you’ve received?

Worst: you have to write every day to be a ‘real writer’. Name not to be mentioned!
Best: you think you don’t know what you’re doing, but you really do. Just keep going. Nigel Krauth.

What is your favourite song by a female singer, and why?

Find out more about her latest book at Text Publishing.

View all posts by katekategordoncomau